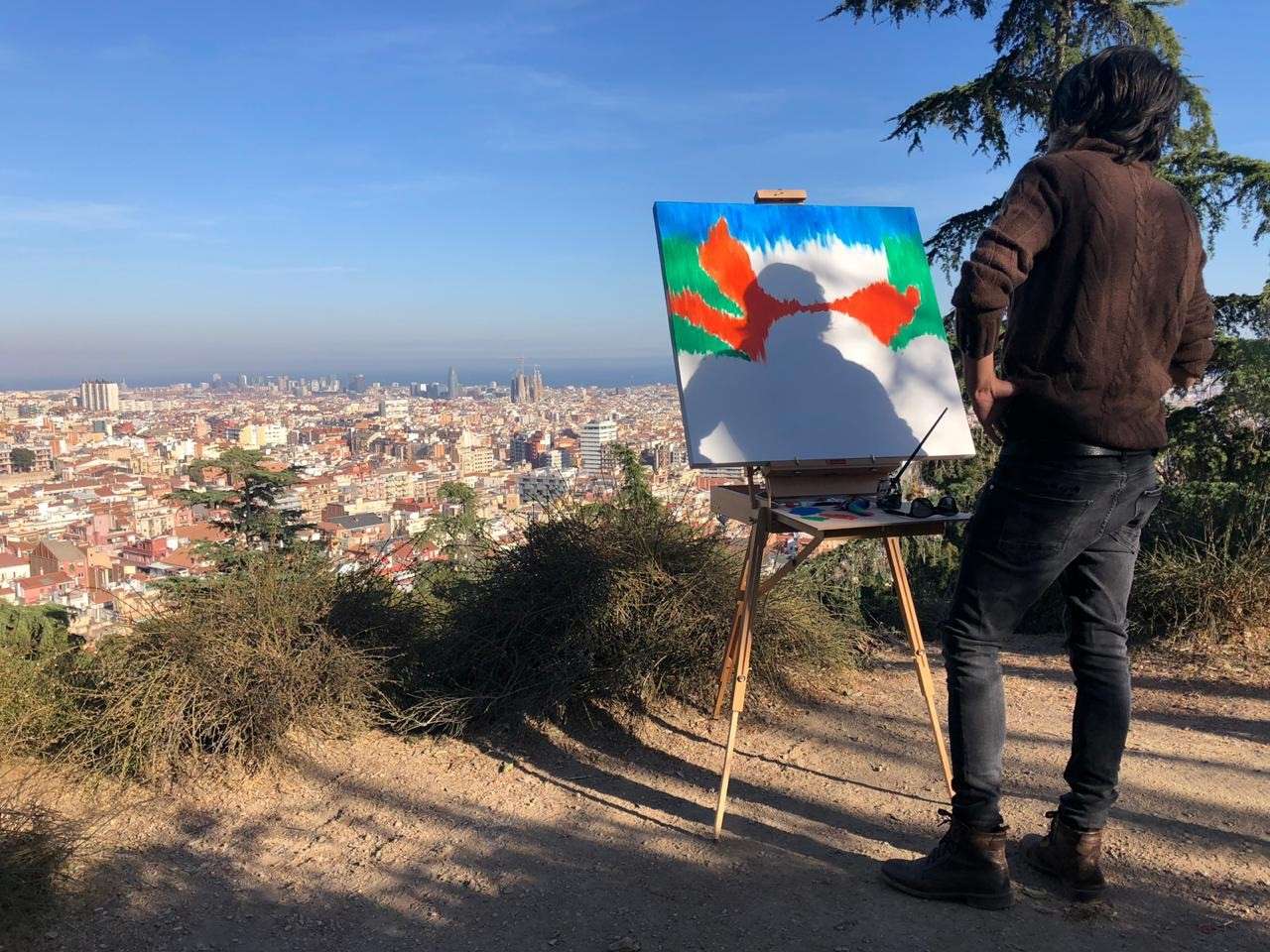 Posted at 18:00h in Art by Miroslavo 0 Comments

Last weekend, I decided to overcome my worst nightmares. I took my brushes, paints and newly purchased travel easel, and headed outside to start painting at my favourite spot in Barcelona—El Parc del Turó del Putxet. Thanks to my partner in crime, I have everything very thoroughly documented and would like to share this endeavour on my blog. 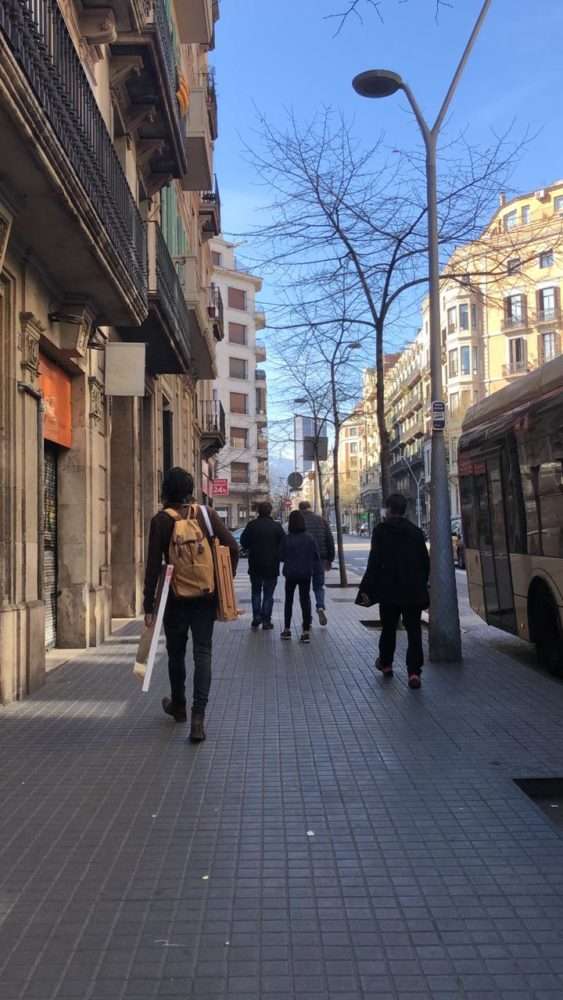 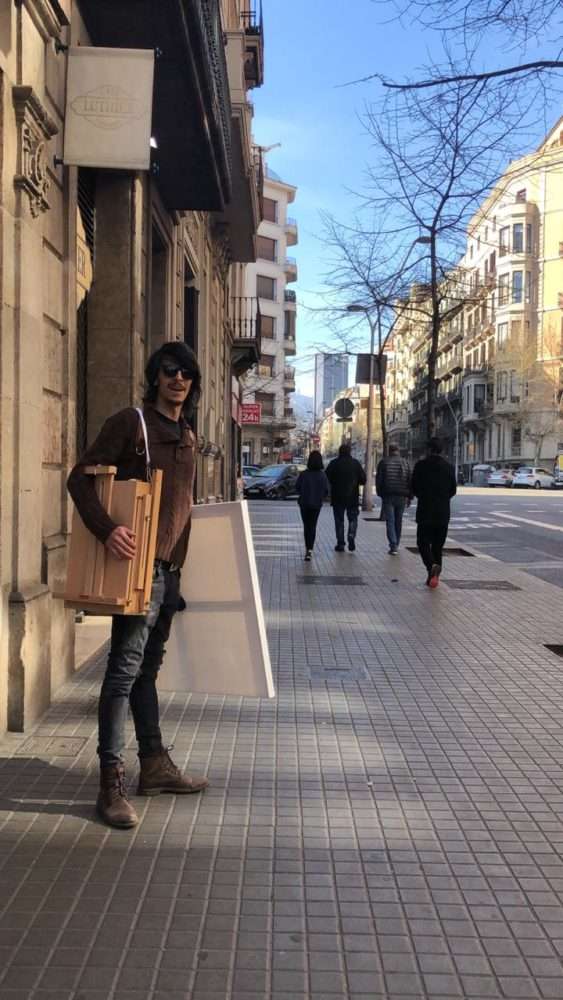 The park at El Putxet is one of my favourite places due to its peaceful and secluded vibe. Not many people know about it or go there, as it’s very far, a long steep walk, as well as located in a residential area. Whenever I go there to relax, usually, one or two people are sitting at the highest point of the park, which overlooks the magnificent Barcelona and gives us a spectacular view. It takes some time to get all the way up, to the highest level, but it’s totally worth it.

Of course, it’s one thing to go there for a walk empty-handed, and another to go there with a wooden easel, a big canvas, a backpack, and with a bunch of fear and excitement. It was the first time in my life that I was going to paint outside and with potential viewers passing by. But well, I chose this park, as it’s usually not busy at all, and I naively expected it to be the same on this beautiful sunny Saturday. Well, I was wrong.

I arrived and there must have been at least 10-15 people. Some playing football, some doing yoga, some reading books, some just chatting and some playing music. I sat down on a free bench and took 5 minutes to rest from the long walk, as I was quite exhausted. While doing that, I was looking for the perfect spot for my easel and the best spot just freed up. Naturally, I seized this opportunity. It is the only spot on the hill which opens the heart of Barcelona to the fullest and it was mine to conquer now. 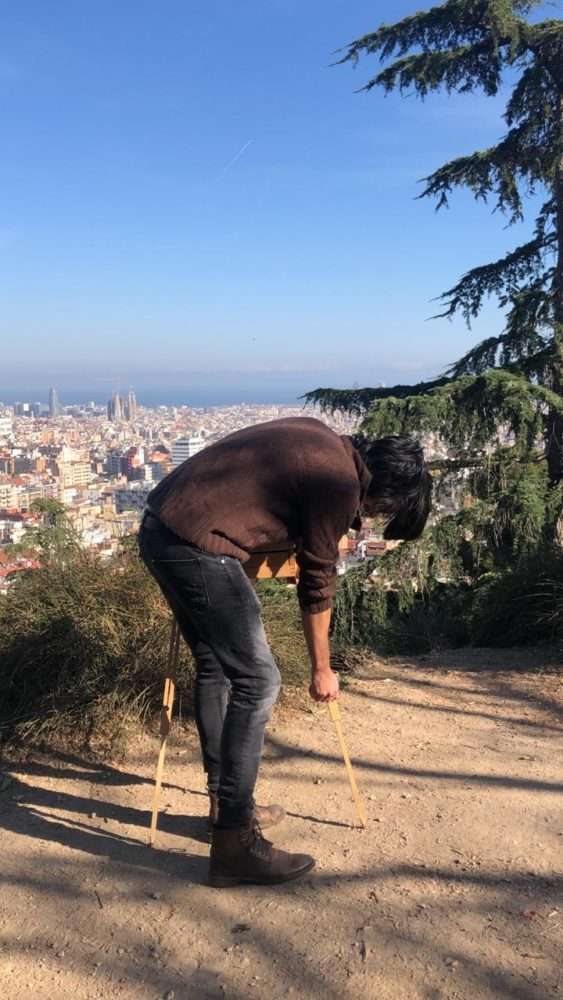 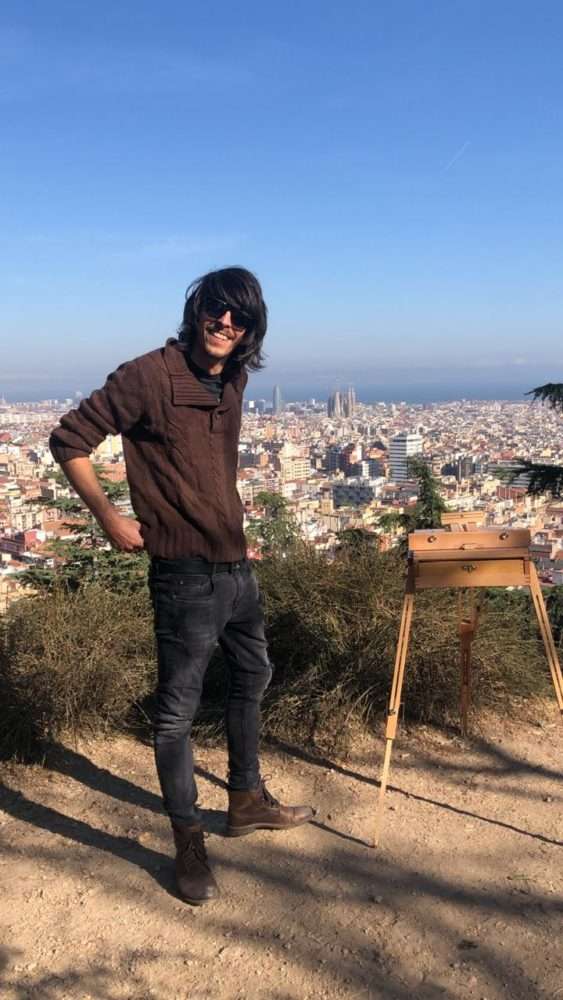 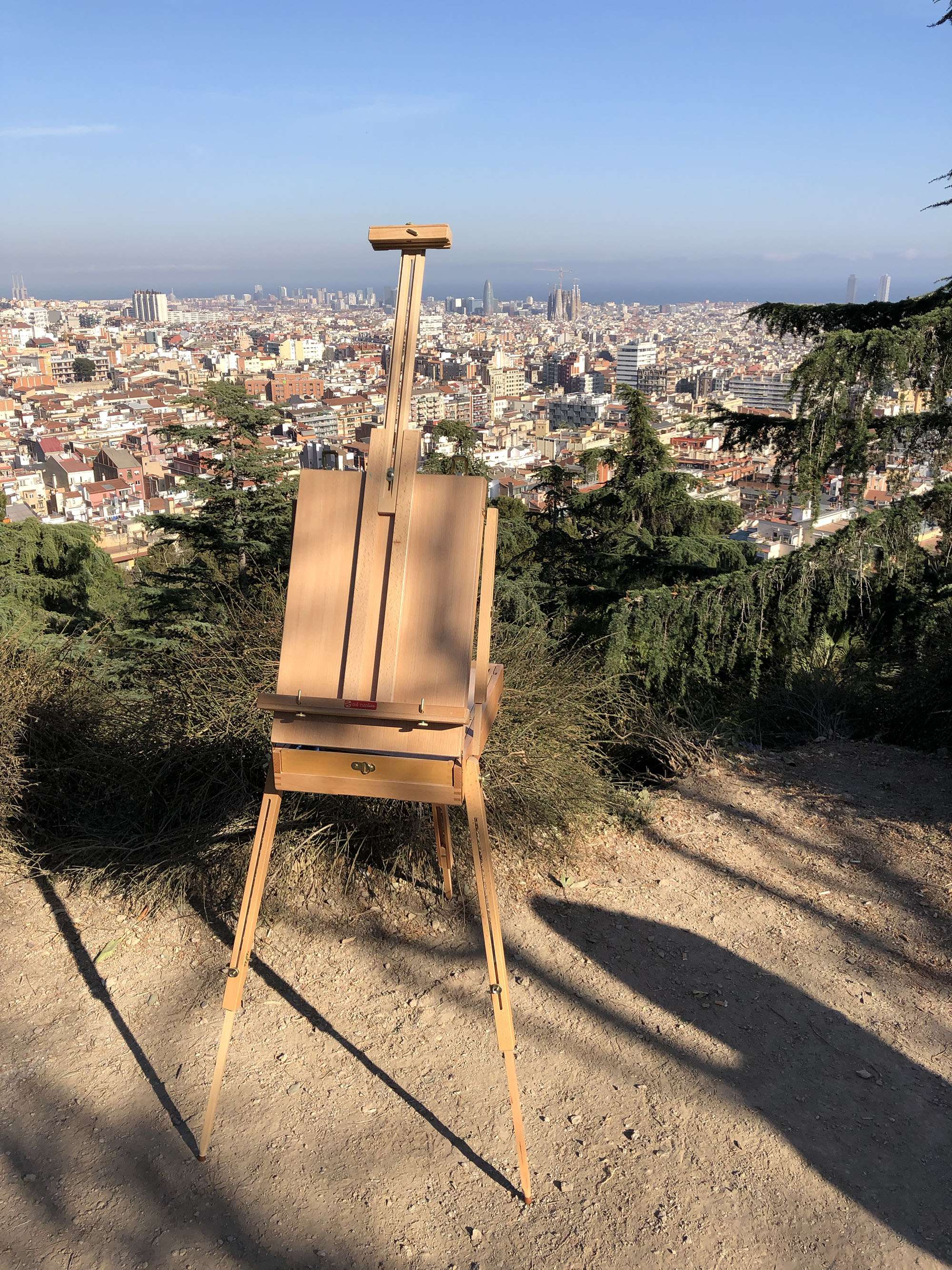 Even though the busyness of the place on this marvellous saturday shocked me a little, I was too excited and happy as hell to even care that people would be watching me all afternoon while I create my painting.

I had no idea what I was going to paint beforehand so I decided to just leave it purely to the moment and see what happens and where it takes me. 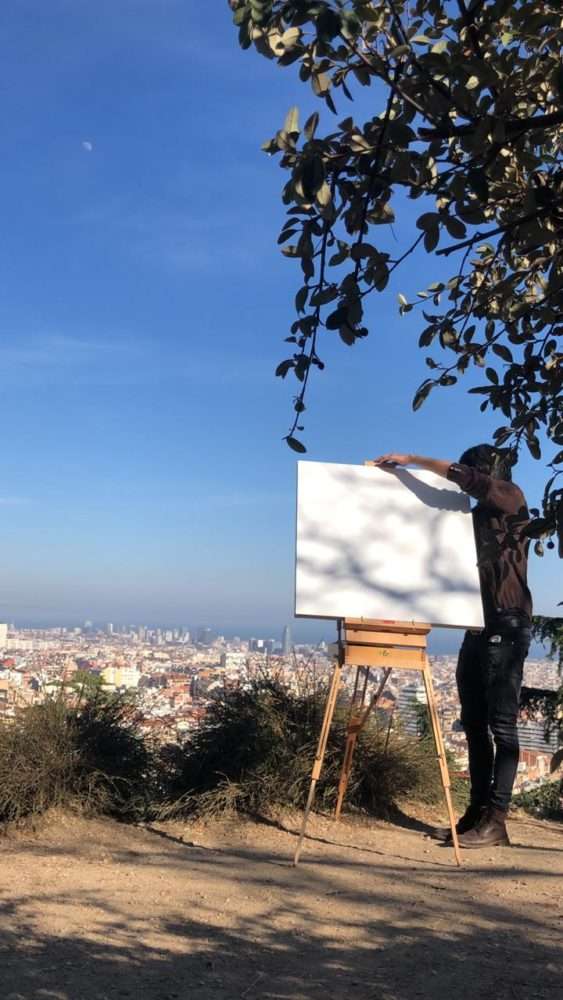 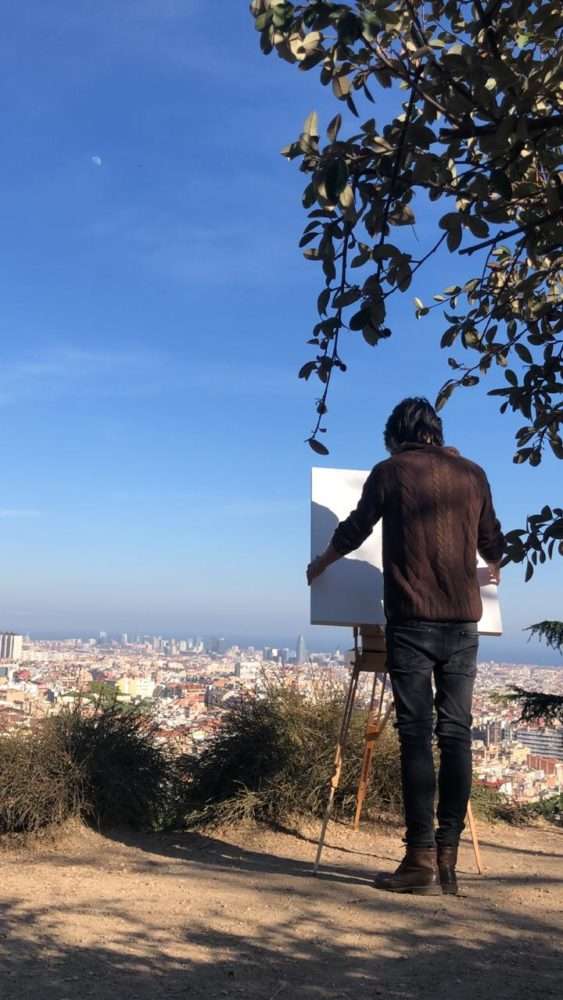 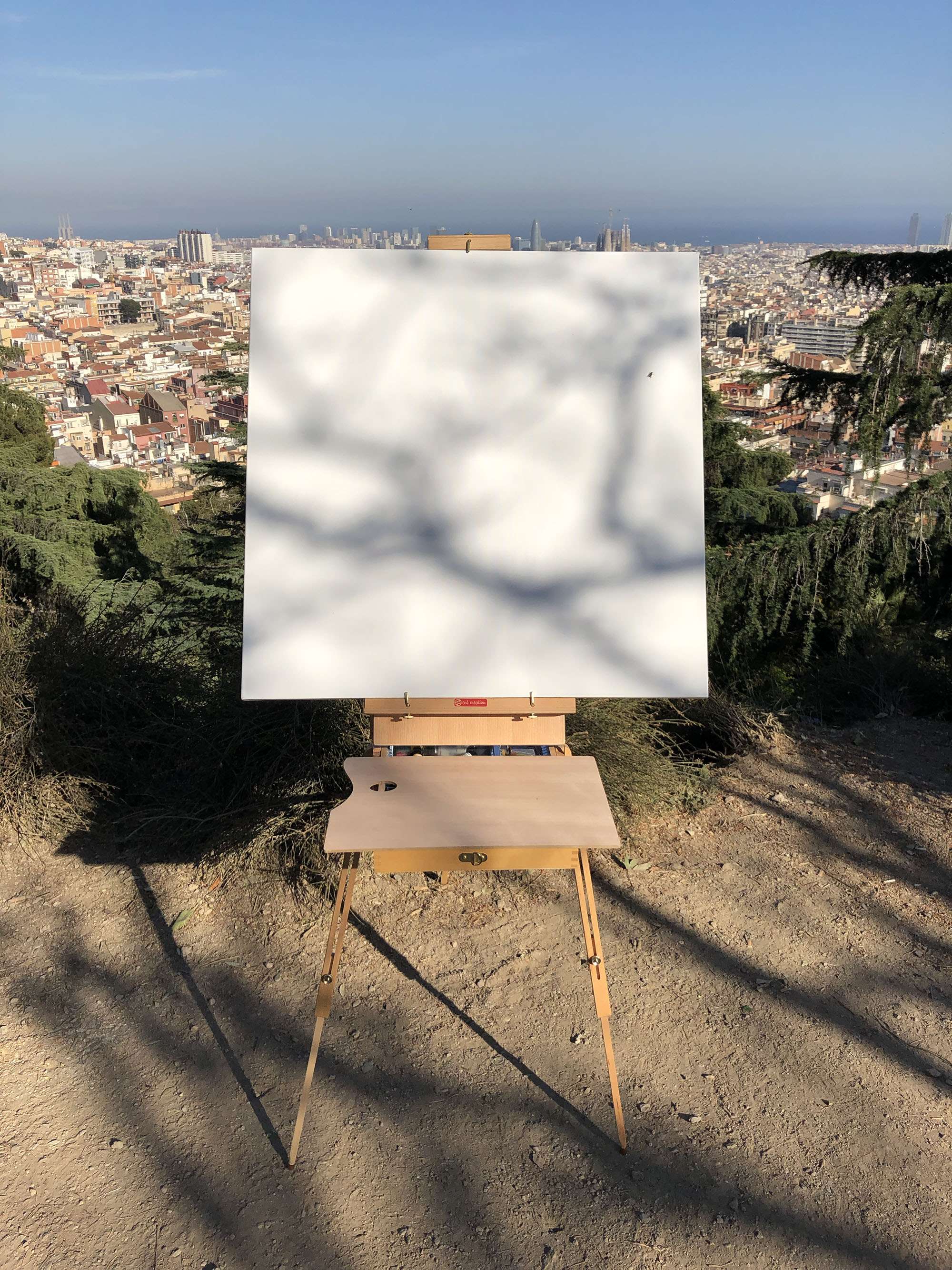 So I installed my easel and my canvas and just got to work. I must say, I was feeling like never before. Being outside, having this breathtaking view in front me, surrounded by people each enjoying their afternoon, and expressing my emotions and thoughts in this environement was quite profound and unprecedented. Yes, I felt some fear. But I also felt extreme freedom, like those birds that flew by every now and then. 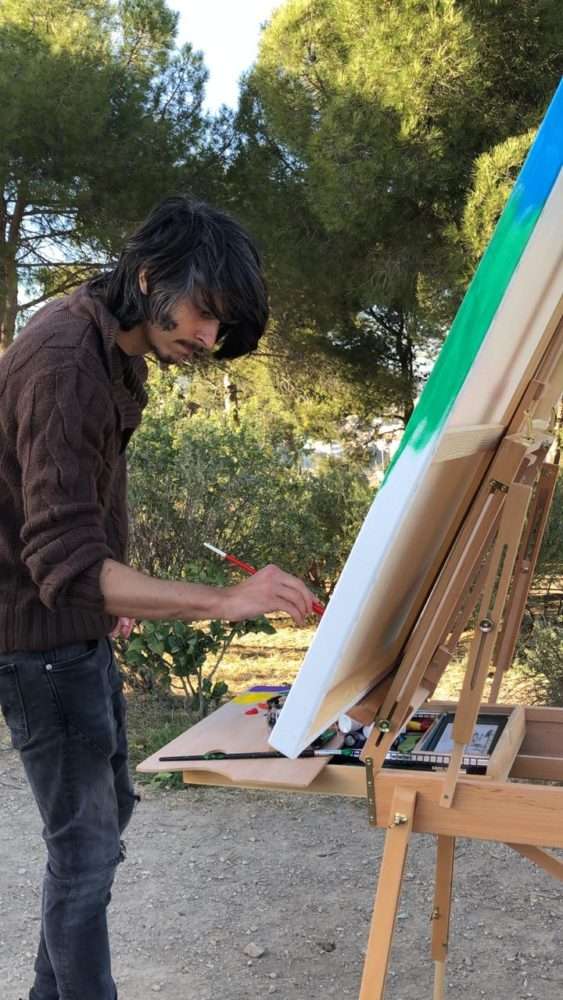 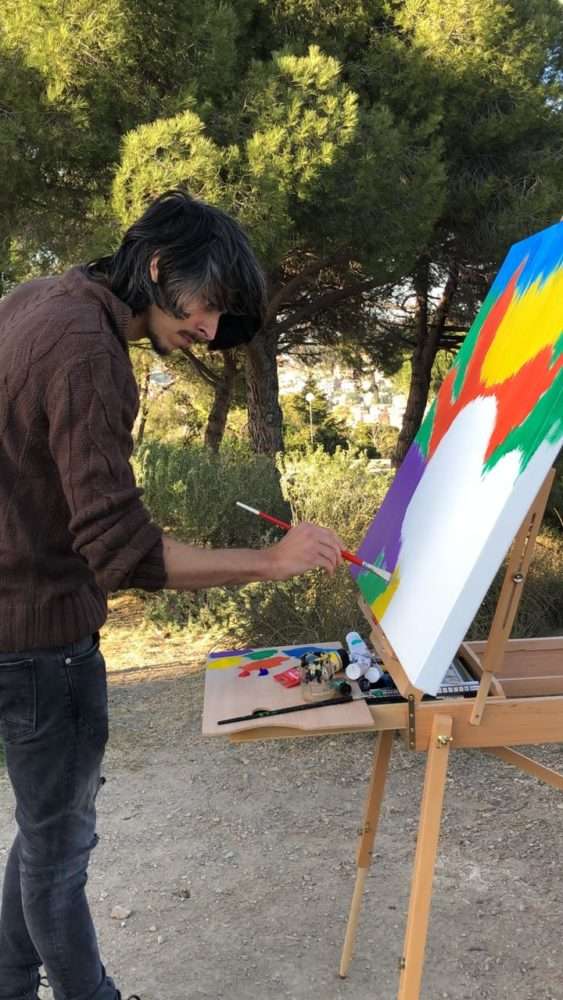 Overall, people were receiving the fact that I’m painting well, and I felt good being there. Some people were sitting around for long, reading, some guys playing various musical instruments closeby as well as from a more distant part of the park. A few people even came up to me and wanted to observe the painting closely. The whole place was changing all the time and was creating various moods and vibes. I let myself be seduced by them while being deeply focused on my creation and what I’m feeling and thinking. 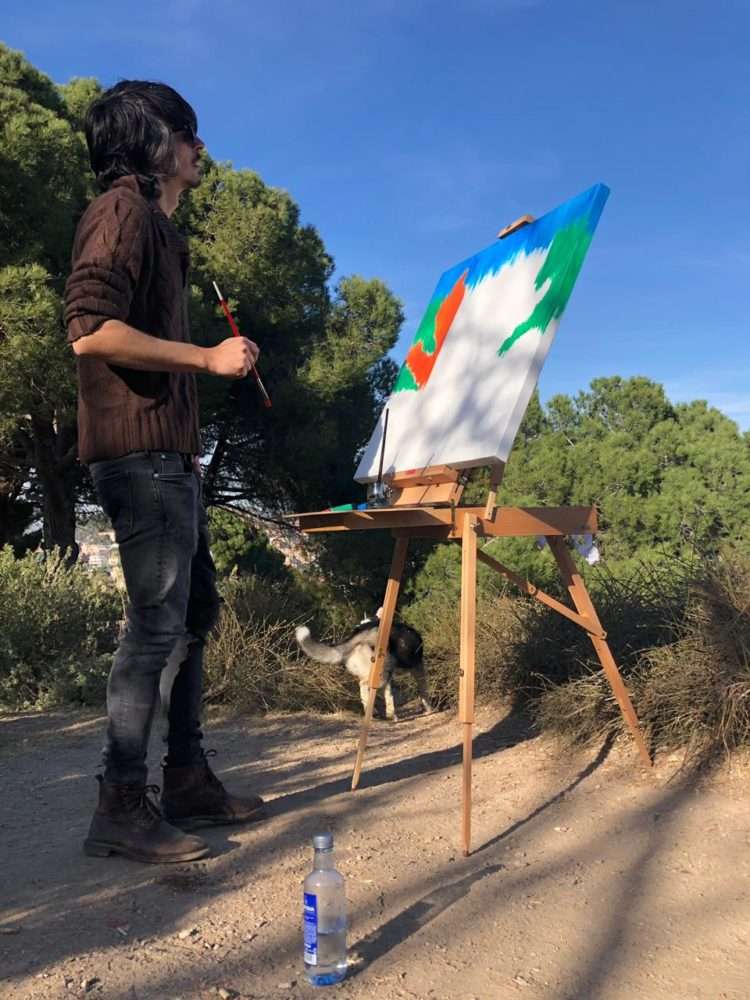 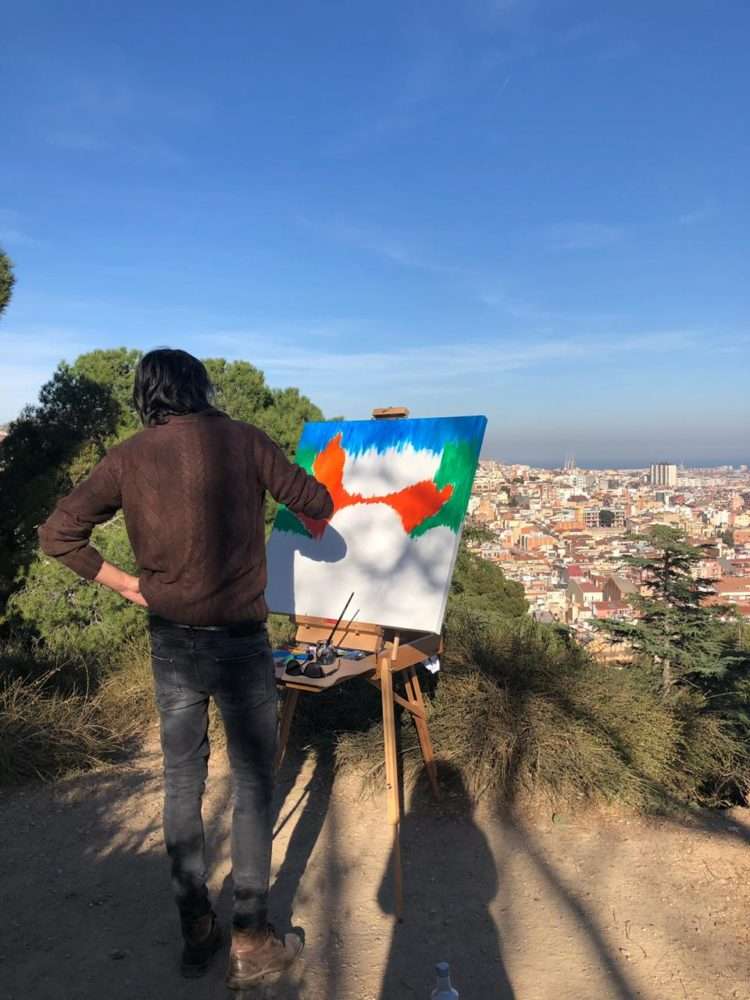 I was inspired by everything that I saw, felt and witnessed that afternoon at El Putxet. It was pure, completely open and unique. Also, being accompanied by my partner, it added a touch of romance to it, and all climaxed when I finished the piece and the sun was about to set. 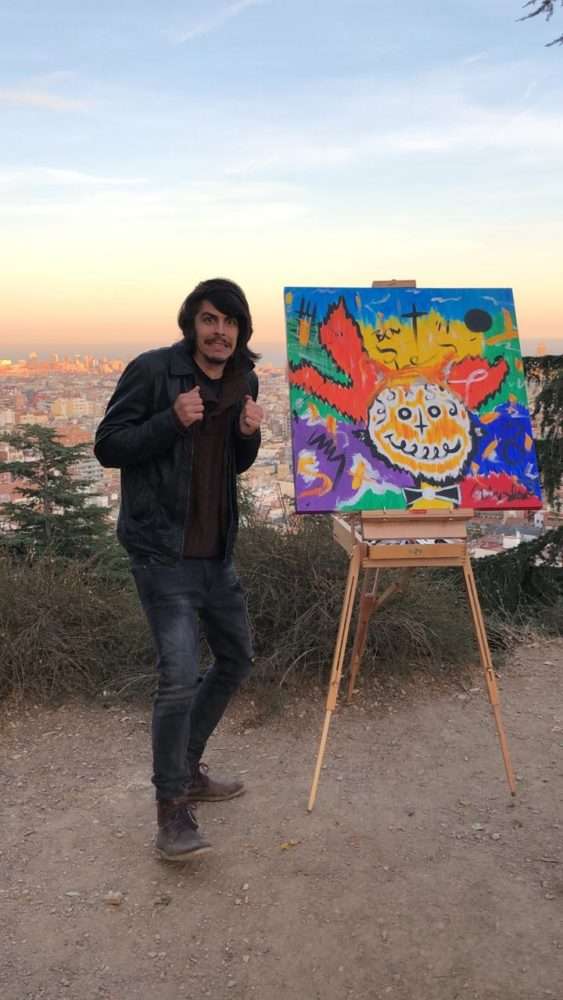 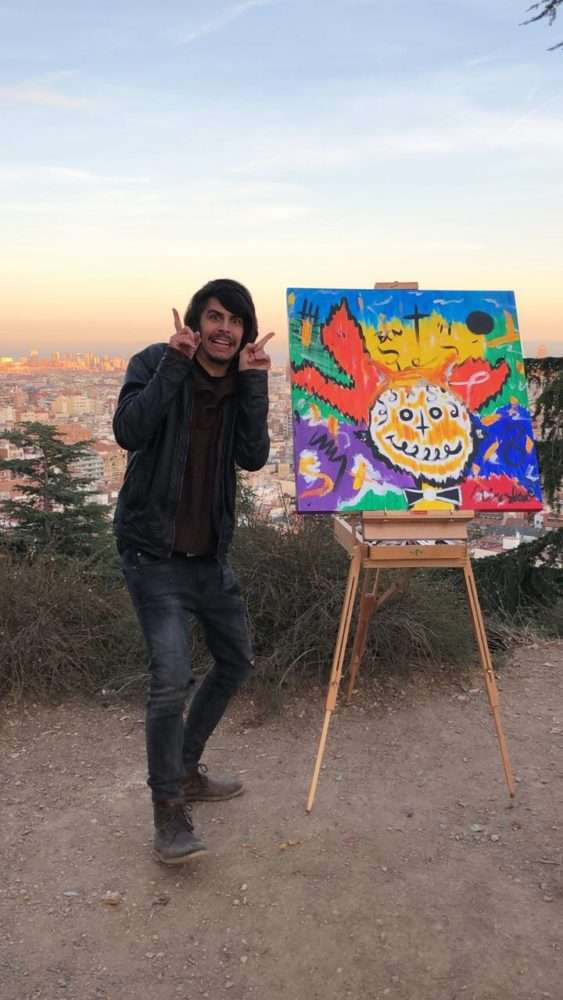 Of course, this was not the end of our journey, since, I still had to pack everything and bring it all home through the busy metro and famous streets of Barcelona. With an easel in one hand and the still partially wet canvas in the other, I took off. I was attempting to hide my artwork from the public, as I had enough exposure for one day, but it was impossible, no matter how hard I tried. People were observing and investigating what I have there. In the end, I made it safely home and even though I was quite exhausted, I felt great and liberated. 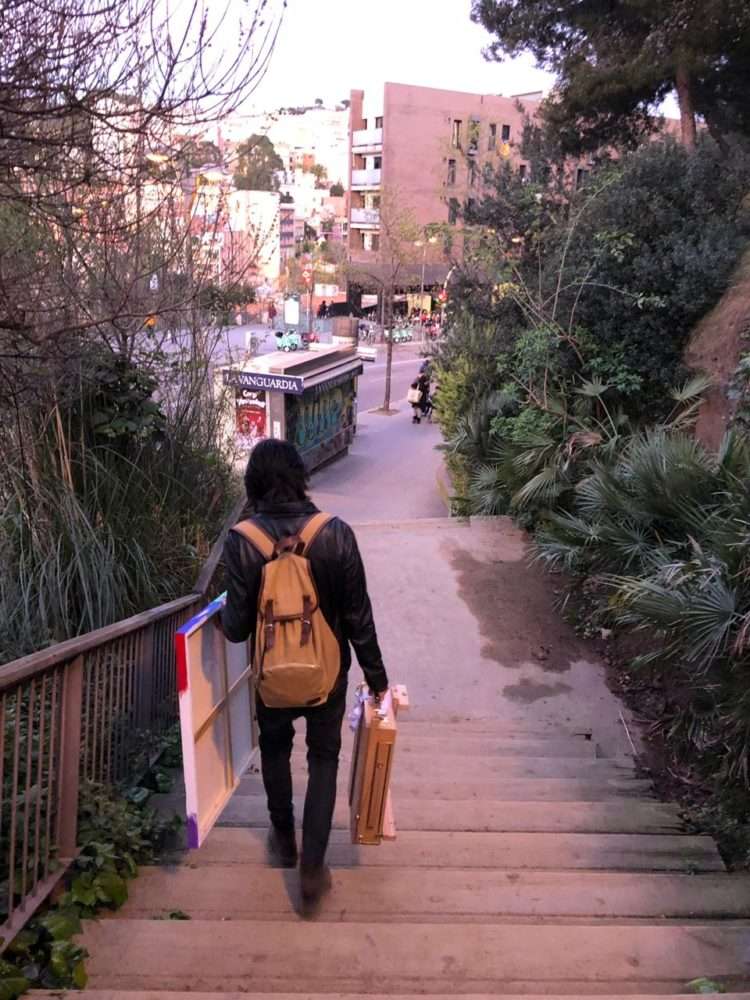 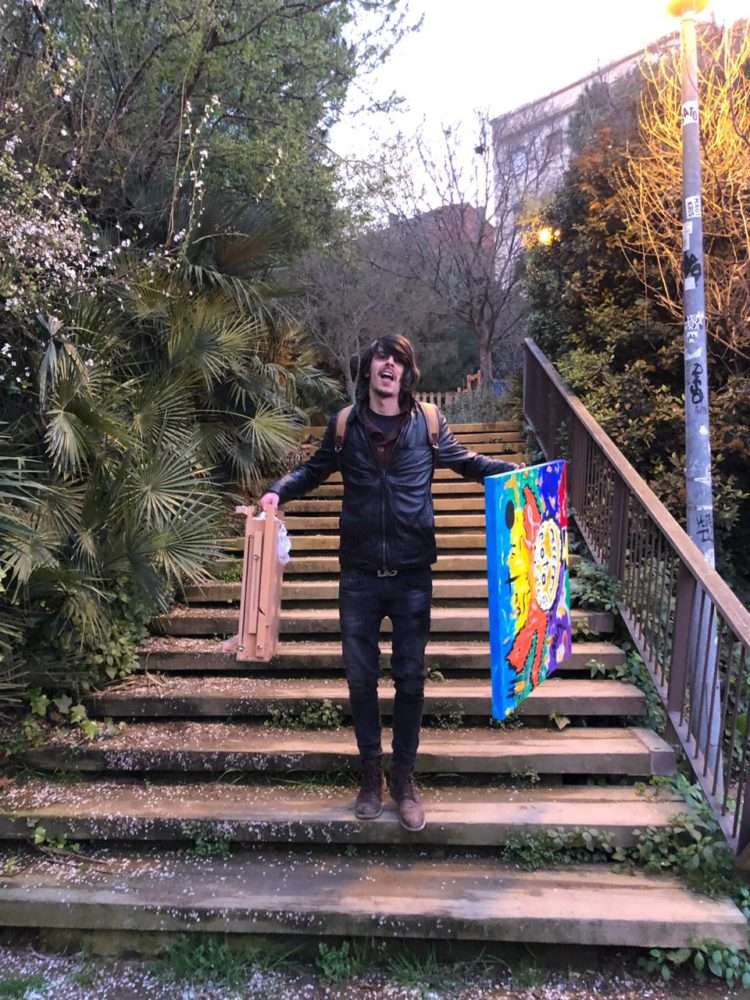